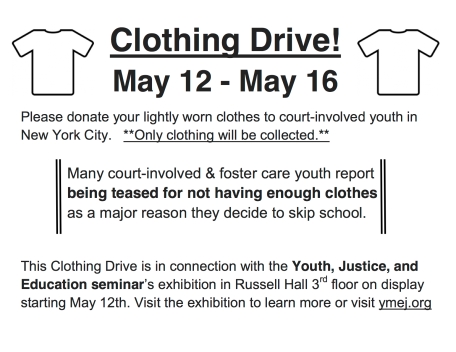 In conjunction with this year’s YMEJ Exhibition — “Inquiry into Educational Justice” — we are launching a clothing drive to collect new and like-new items of clothing that will be donated to alternative to detention (ATD) programs in New York City.

This clothing drive is our second, and follows on the huge success of last spring’s event in which we collected over 65 bags of clothing and accessories that were distributed to 5 different ATDs in three boroughs. In our work with youth, we have consistently heard from them that a major obstacle to regular school attendance is the fear of being teased or bullied for a lack of clothing. Thus, we reached out to the Teachers College and greater Columbia University community and were overwhelmed by students’ thoughtfulness and generosity. Our ATD partners were similarly touched and Ana Dopazo, a Senior Education Specialist at Choices ATD, shared these thoughts with us:

Usually when people hear of a child who is consistently missing school they think that the child is getting into trouble or not interested in school or lazy etc…but in actuality there are many reasons that a child might not be succeeding academically that are not by choice. The participants that we usually have in our program are living in poverty. We constantly see kids that refuse to go to school because they don’t have clothes that are clean, in good condition, or that even fit properly because they’ve grown out of it or are sharing clothes with family. Sometimes just getting them new clothes is the simple solution to their school attendance…it gives them their confidence, allows them to feel comfortable in a social setting, and it gives them the motivation to go to school. Many people can’t understand why this would affect someone so tremendously because most of us don’t realize that being able to go shopping for clothes is a luxury, and not something that everyone is capable of doing. The clothing drive will help our kids in need to hopefully be able to add a few items to their wardrobe that will allow them at least some outfits they can mix and match to attend school. I don’t think that this is the answer to all our truant kids but it’s a start…it’s an opportunity to allow these kids that actually want to go to school a chance to have a normal educational experience without the worries of whether or not he/she will have something to wear to school. This clothing drive can also be the answer to our kids not getting rearrested for stealing things they need and may also prevent teasing or bullying in school. So its not just giving a kid a shirt or pants to wear its so much more that: you are contributing to this child life.

Please share this information widely and look for donation boxes in both Zankel Hall and Whittier at Teachers College — and please consider making a clothing donation.

“Hunger hurts everyone” – A Place at the Table

After a sweltering July, I took pleasure in the breezy feel of an unlikely August Sunday afternoon. I switched on the tv as background noise, but quickly became drawn into the stories being shared by two women as they sat and talked with the always astute Bill Moyers. The topic being discussed, among other things, was the film “A Place at the Table,” and Kristi Jacobson, one of the film’s directors and producers, and Mariana Chilton, director of the Center for Hunger-Free Communities, were Moyers’ guests. Their argument was relatively simple: hunger hurts everyone.

I found myself nodding along, but was unprepared for the footage they shared from the film, which also documents the efforts of Chilton and her Center against the backdrop of the federal funding cuts to the Supplemental Nutrition Assistance Program (SNAP). One loving mother eats a bologna sandwich in the kitchen after serving her two small children a portion of pasta each. She does not “look hungry” as the argument sometimes goes, says Chilton, who notes in a comment to Moyers after this scene is shown that the mother even hides her nutritional sacrifice from her children.

We have seen this narrative many times: parents who care deeply for their children, but who are still unable to provide the necessary basics. Where are they meant to turn? What supports exist for adults who are working full time, often more than one job, and whose wages keep them perpetually “food insecure” — the term used throughout the film to signal an all too common phenomenon: not knowing where one’s next meal is coming from.

Moyers’ guests talk policy, change, action, and urgency, and yet the parting words have to do with the struggle to get noticed by legislators for long enough of a period to actually effect change. Too mired in uninformed definitions of dependency and misguided notions of socialism are the political arguments that seem to surface any time issues of great urgency — and this includes hunger as well as shelter, safety, and wellbeing of children — are brought into the realm of legislation.

It’s enough to make one ask what else can be done at the local, community, neighborhood level. This is one of the reasons I appreciate the multi-tiered efforts of Chilton’s Center at Drexel University that seems to bring together families — who they are calling “Witnesses to Hunger” — with a shared focus on community-based projects, actions, research, and policy.

Here’s another link to PBS Newshour footage about the film, featuring clips and additional interviews:

And in case you were wondering… yes, this is where YMEJ is headed. And we are thrilled to have learned about the Center for Hunger-Free Communities as inspiration. Universities, too, can be part of the work and not only in the business of posing problems and solutions.

Link to Moyers’ broadcast – or watch the complete program here:

Click for more resources connected with hunger, nutrition, and poverty.

Excerpt:
“Too often, we blame poverty on the poor. It is easier than admitting our complicity in the systems that reproduce our privilege and reinforce the hardships of others. After all, if we were to truly commit to eliminating poverty, we would have to sacrifice. We would have to pay higher taxes, make space in our neighborhoods for affordable housing, send our children to publicly funded government schools, and hold our politicians accountable for our most vulnerable citizens. Instead, we shake our heads and sigh when the media tells us what we want to hear: that the death of children is not in our hands.”